In my last post on Machine Learning we followed Unity's Getting Started tutorial and managed to get the "Balance Ball" example project up and running. In this post we are going to start something from scratch and see if we can dig a little deeper and learn some new things about Machine Learning.

If you are new to the series I recommend you checkout the previous posts first, here's the whole series:

We start a new project from scratch and train an agent to learn the solution to a simple problem.

For this post I knew I wanted to dig a little deeper into Unity's ml-agents so I can get a better understanding of how I can can eventually use the SDK to play Mr Nibbles Forever.

I started off by reading some more of the documents on Unity's GitHub page. They were interesting but they didn't really suggest to me what my next steps should be after completing the Getting Started.

It was then that I stumbled across this video from Unity 3D College:

Sweet! Exactly what I was looking for. A clear and concise next step with some great tips. Im going to see if I can take the video and recreate it in my own style.

I created a new Github Repo for this post: https://github.com/mikecann/MrNibblesML then downloaded the latest ml-agents source code from Unity's github: https://github.com/Unity-Technologies/ml-agents/releases (version 0.2 beta at the time of writing). 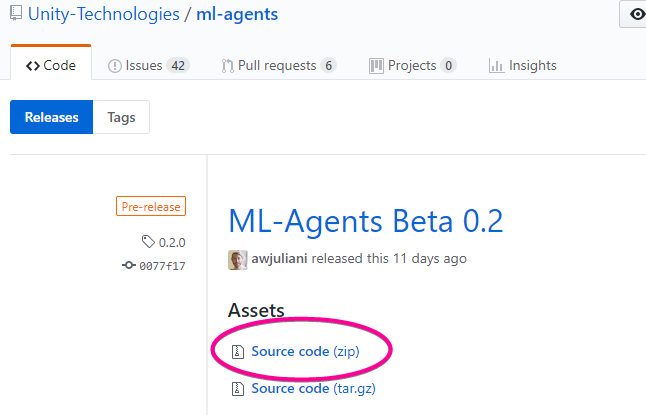 I then stripped out the examples projects and other things that I didn't need.

Then I downloaded and imported the TensorFlowSharp library project from https://s3.amazonaws.com/unity-agents/0.2/TFSharpPlugin.unitypackage. 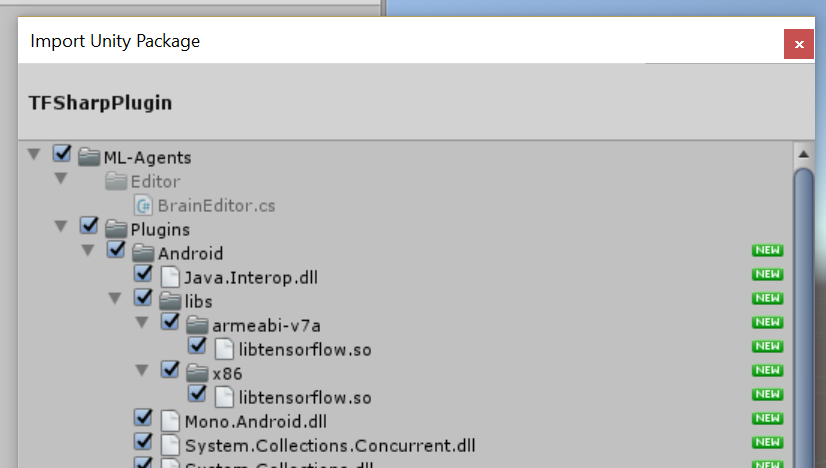 Now I now have a clean base to build my experiments on top of.

After watching the excellent video from Unity 3D College it got me thinking how I could make this more "Mr Nibbles" related. Perhaps if I just simplified the Mr Nibbles Forever game down to a 1-dimensional plane and reduced the gameplay to "move left or right or get to the nibble while not touching the spider" that would be a good next step on my Machine Learning mission to completely automate Mr Nibbles Forever. 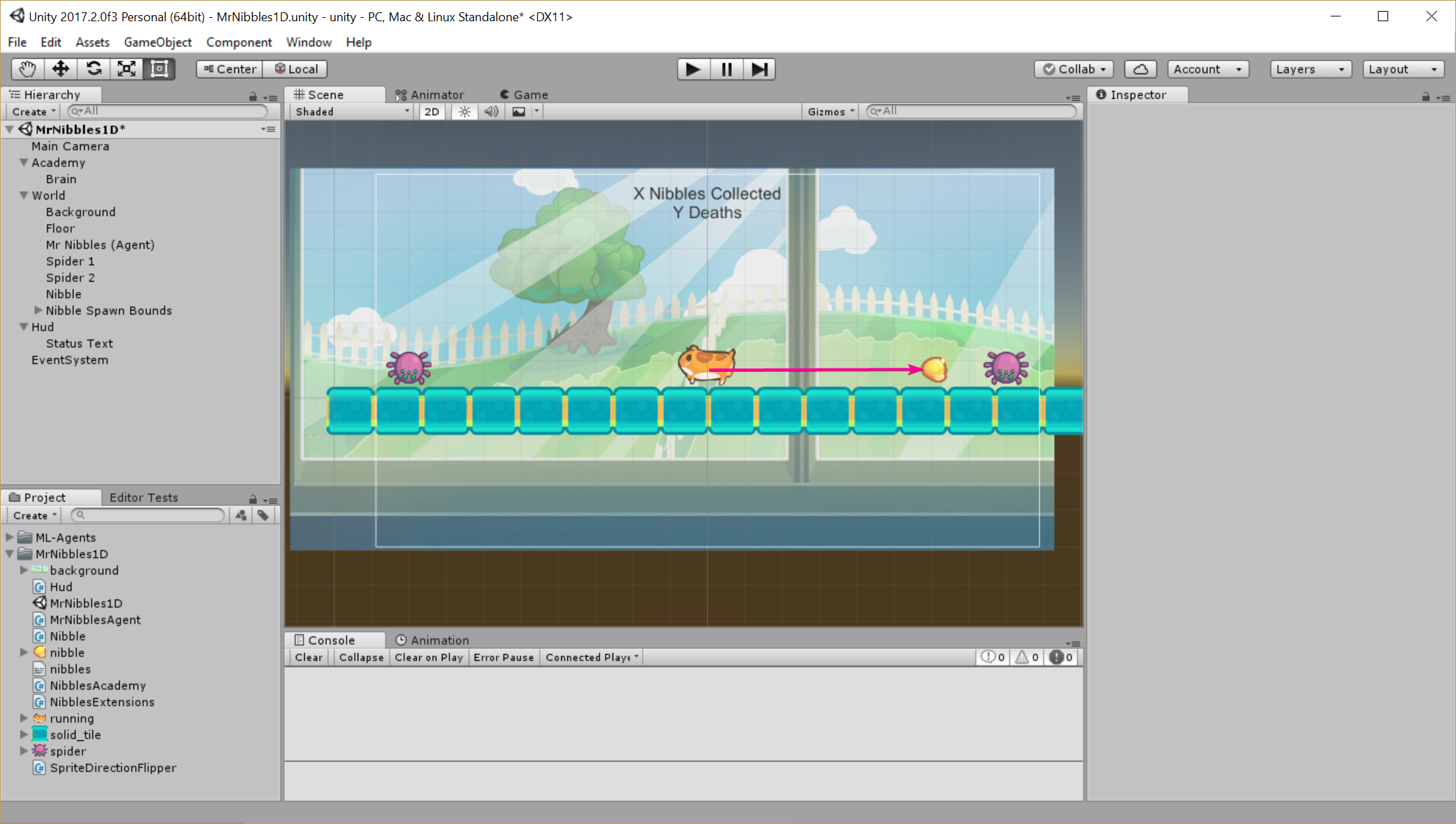 Next up I created an empty Academy script.

The Academy isnt used for this example so stays empty, but we may use it in future projects. 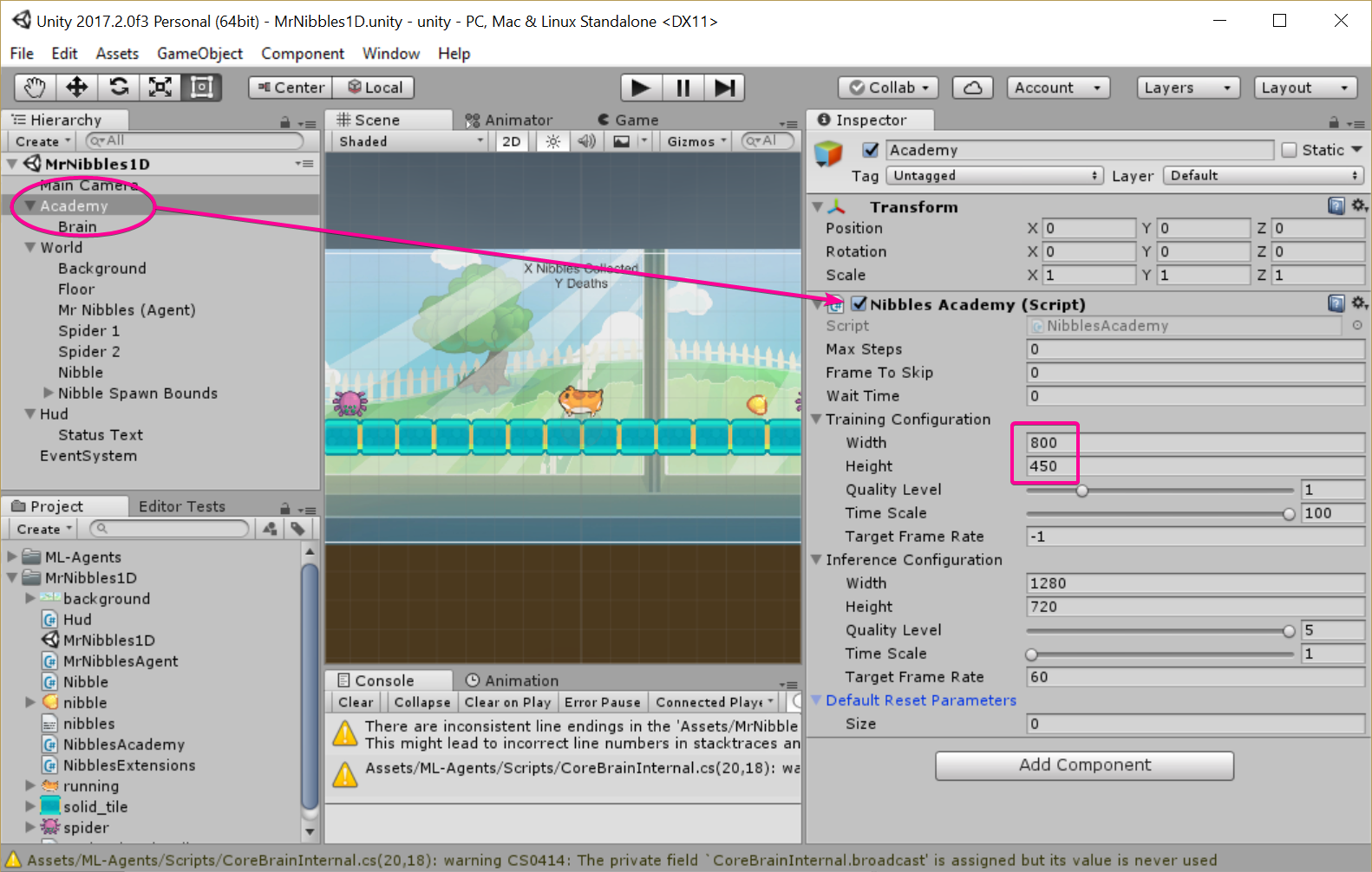 I changed the Width and Height properties in the Training Configuration section because I like to see what's going on during training tho this could perhaps hurt training performance (something to tinker with later).

The "Brain" is the object that communicates with the the Academy and is the.. umm.. brains of your scene.

For now I have just left the default settings, but will be coming back to this soon.

The nibble is the target that Mr Nibbles is going to be trying to collect.

When collected the agent restarts and at the same time we re-spawn the nibble at a random position between two points.

The spiders are the things that can kill Mr Nibbles so he should avoid them. For this simple example however they just represent the boundry for the world, and thus if the agent "touches" them by leaving the boundary that counts as a death to Mr Nibbles.

The agent is where the meat and potatoes of the C# code is. Its the part that controls how Mr Nibbles behaves.

I first started off with an empty agent.

We know from my last post that at its heart Reinforcement Learning (the type of machine learning we are doing) is training an agent which action to perform given a specific state.

So with that in mind we need to begin by telling the ML code what the current state of the world is:

Next up is the actions that the agent can take to affect the state:

There are only two possible actions that the agent can take. Either move left or move right. Each step the agent will try one of these actions depending on what it previously leant will get it the highest reward (more on rewards in a second).

You will note that the action.Is() is just a helper extension method I wrote to make things a little easyier to read:

Note: Im a big fan of writing code that doesnt need comments because the variables and functions have been named so that they are redundant.

So now that our agent can either move Mr Nibbles Left or Right. We also need to define what happens if Mr Nibbles moves too far to the left or right, i.e. he goes out of bounds.

Here we pass in the spider's positions which represent the maximum and minimum bounds for our agent.

So each tick OutOfBounds() is checked and if true we set the reward to reward = -1 and done = true.

The reward is the feedback mechanism that the agent uses during training to determine if the action it took resulted in a positive outcome or not and thus it updates itself to make that action more or less likely given that state next time.

Now we have the boundary condition covered, we just have just one more scenario to cover during a tick; when mr nibbles collect a nibble.

Here we use a range check to see if we are within one step of the nibble, if so then we HaveReachedTarget() and AgentSucceed() will be called. In doing so we positively reward the agent thus encouraging that behavior in the future.

The final thing we need to cover for our agent is what happens when done = true caused by the agent when it is OutOfBounds() or HaveReachedTarget().

We simply record what the starting position is and set that again and tell the Nibble to respawn at the new random position.

Now we have defined all the important parts of our scene we are almost ready to test things, but first lets just setup a quick HUD so we can see the "score".

We are finally ready to enter playmode and test out our scene prior to training. First we need to make sure the Brain type is set to Player and we have mapped the "Player Actions".

Sweet! We can see that it works, when Mr Nibbles touches a spider then he "dies" and when he touches a nibble he "wins".

Now when we move left or right Mr Nibbles will face the correct direction.

NOTE: we have to use FixedUpdate() instead of Update() because the Agent takes its actions on the FixedUpdate loop.

Okay so far so good, we have a working scene that is controllable by a human, now comes the interesting part. Lets train an computer to play instead of us.

Now we just need to build our scene exe (also known as environment) and save it to the /python/ directory.

Okay with that done lets fire up jupyter notebook:

And open the PPO.ipynb notebook.

Now lets change the Hyperparameters (such a cool term):

Its a bit of a dark-art knowing which of these to change for your given scenario.

I used a combination the Unity 3D College video and this doc;

Note that I have set run_path to be "mrnibbles1d/run1" because we are probably going to try a few different thing out so its good to keep track of this by splitting things into separate runs.

Okay cool, lets give this a shot then. Pressing shift enter on each of the cells in the notebook we start the training process, the environment window opens up and straight away we can see that the agent is training: 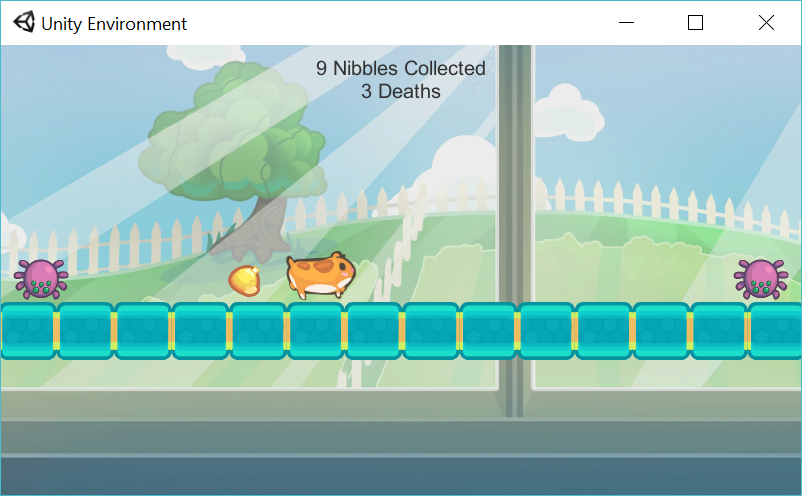 To get a better picture of whats going on inside the agent, lets fire-up tensorboard: 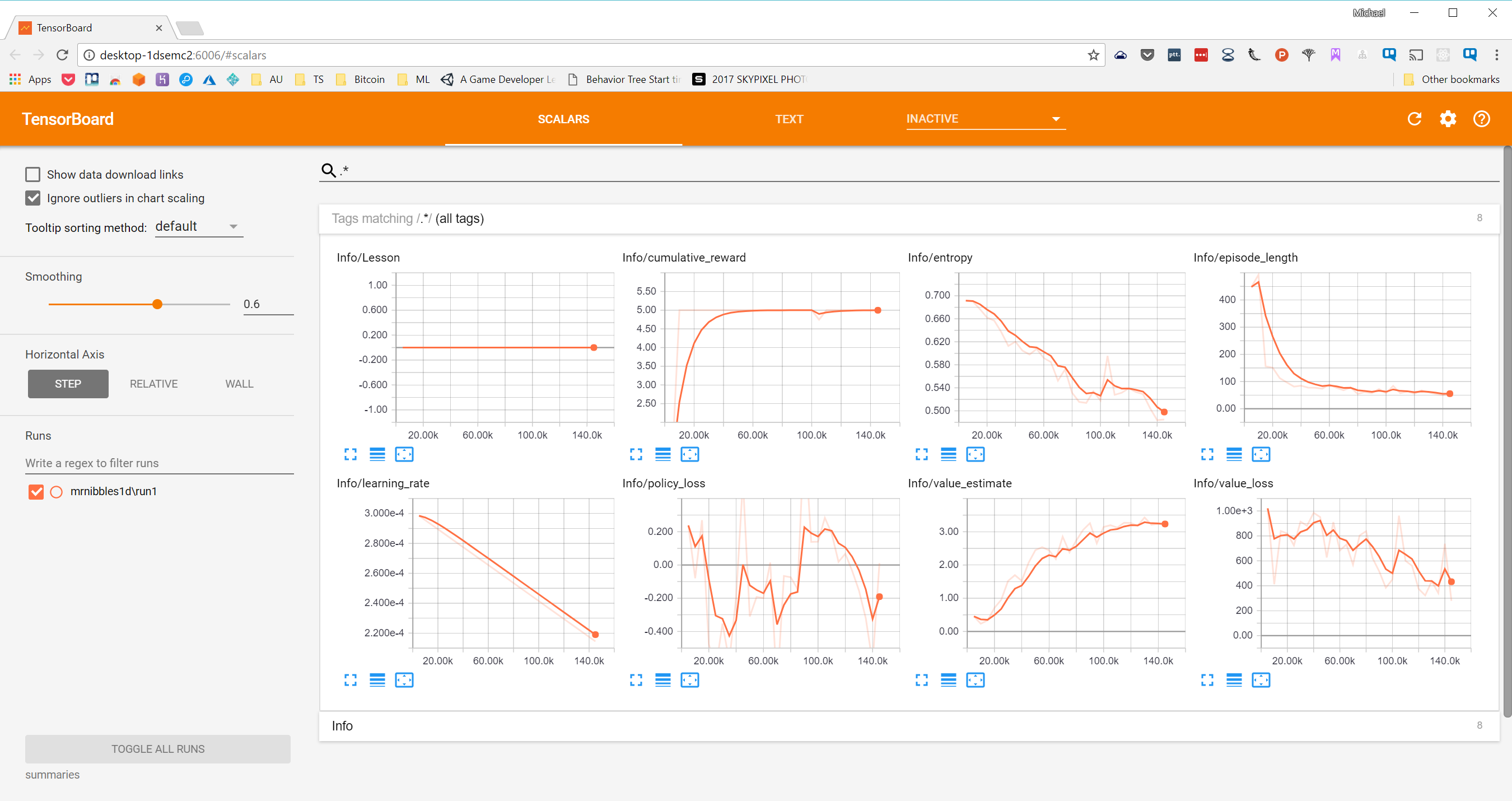 Since last post in this series I have come to understand a little more about these graphs:

cumulative_reward tells us how much reward was given to the agent in a single run. So we can see that is started off low as the agent randomy tries different actions and consequently doesnt get much reward. Quite rapidly however it figures out how to get more reward up until it levels off at around 60k steps. So from this we can see that in about 60k steps the agent has pretty much found its optimum strategy as it is no longer increasing its reward per run.

episode_length this tells us how long it takes the agent to complete the run, either pass or fail. So we can see, as with the cumulative_reward, that the time the agent takes to finish starts off pretty high as it randomly moves around but rapidly works out an optimum strategy thus decreasing the episode length.

After a few hundred k steps I stop the training, however it probably could have been stopped around 60k steps once it has found its optimum solution.

I export the trained model to a .bytes file ready to be imported into the game.

I copy the model from /python/models/mrnibbles1d/mrnibbles1d.bytes to /unity/MrNibbles1D/ then set the brain to Internal and the model on "Graph Model". 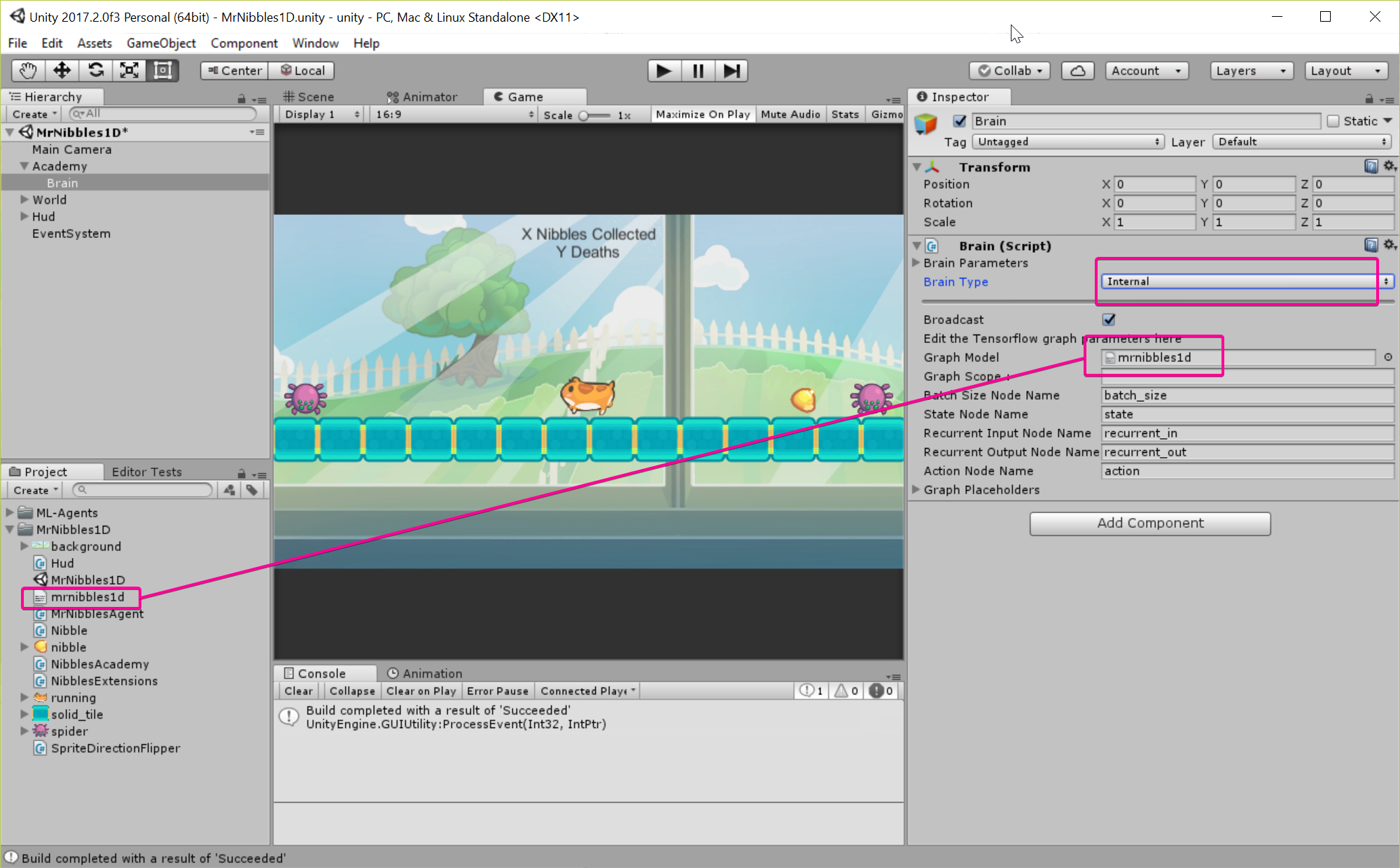 Now we should be able to just press play and see how well our trained model does:

Sweet! It works! Its able to move towards the nibble 100% of the time.

It doesn't come across on the video but Mr Nibbles seems to occasionally "jitter", that is turn left then right repeatedly, as it hesitates towards a solution. I want to see if I can get rid of that.

One way I can think of doing that is by penalizing the agent every time it changes its mind:

So each time the current action isnt the same as the last it takes a penalty.

I change the brain back to External and re-export the environment. Open the notebook again and change the run_path:

And run it again.

Run2 is in blue, we can see that the cumulative_reward this time starts off a lot lower before ramping up to the same level after about 120k steps. This is to be expected as we are making things a little more difficult for the agent by rewarding it heavily against changing direction.

The episode_length takes roughly the same amount of time however so that's good.

Lets see how it does when we use the model in the game:

Awesome! Most of the jitter has gone, just a tiny amount when the nibble spawns close but I think that's good enough for now :)

Im really happy with how this turned out, I learnt a lot and I think it has set me up well for extending this to more states and actions.

There's still a ton to learn however and I haven't really touched any of that Python code (other than tweaking the Hyperparameters) so stay tuned for the next episode when hopefully we can extend this project a little further towards a working agent for Mr Nibbles Forever!

If you want to checkout the code and run the Unity project yourself then just clone the repo: https://github.com/mikecann/MrNibblesML